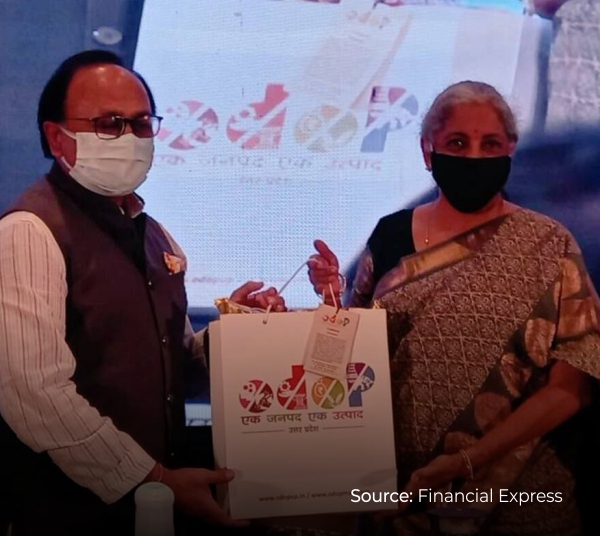 The fund, jointly sponsored by Exim Bank and SIDBI, has a size of Rs 250 crore with a green shoe option of Rs 250 crore. The fund will invest by way of equity, and equity-like products, in export-oriented units, both in the manufacturing and services sectors.

Union finance minister Nirmala Sitharaman on Saturday launched the Ubharte Sitaare Fund (USF) for export-oriented small and mid-sized companies and startups in Lucknow. Sitharaman had announced the fund in her Budget speech in 2020 in the backdrop of constraints faced by small and mid-sized companies in realising their export ambitions, stating that micro, small and medium enterprises (MSMEs) were important to keep the “wheels of the economy moving”.

The fund, jointly sponsored by Exim Bank and SIDBI, has a size of Rs 250 crore with a green shoe option of Rs 250 crore. The fund will invest by way of equity, and equity-like products, in export-oriented units, both in the manufacturing and services sectors.

Stating that the ambitious programme was to support the champion sectors, she said some developed countries like Germany have already tried this by identifying, supporting and hand-holding the champion sectors and giving them necessary technology and fund infusion. Ubharte Sitaare largely follows the same principal, she said, adding that induction of tech will itself bring a big difference to the small and medium units.

“A project that was tailormade for MSMEs to identify champions among them and also support them now also gets the additional benefit of UP’s one-district-one-product (OPOD) programme. UP has already completed the identification process of every product in every district, and also the champions in the state. So UP justifies the launch of Ubharte Sitaare programme,” she said, adding that this will help Sidbi to extend the credit and technology facility and boost capacity to go to the market to raise funds.

The FM highlighted the efforts taken by the government to provide a boost to the MSME sector in the country, including the launch of the production-linked incentive scheme and noted that the USF would make investments in export-oriented small and mid-sized companies by way of equity and equity-like products, and thereby help script a new paradigm of growth in exports. The initiative would play a catalytic role in contributing to the growth of the identified companies and would also have downstream benefits such as growth and diversification of India’s exports, impetus to brand India, and employment generation.

The 594 km-long, eight-lane expressway project from Meerut to Prayagraj will cost nearly Rs 36,000 crore and will pass through 12 districts in UP. The amount of Rs 5,100 crore, under the securitisation process, will be repaid to the bank within a period of 15 years from the toll to be received on the Agra-Lucknow Expressway. During this period of loan repayment, the expressway would continue to be owned and operated by UPEIDA.