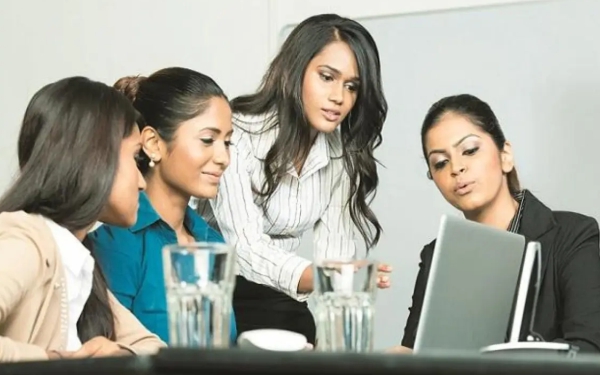 MSMEs and their role in the Indian economy:

MSMEs, or Micro, Small and Medium Enterprises, are the backbone of the Indian economy. India has 6.3 crores (63 million) MSMEs. These combine to contribute about 29% of the national GDP. They have contributed massively to bringing millions of Indians out of poverty and giving them respectable lives and livelihoods.
The Indian government wants to increase the size of the nation’s economy to $5 trillion by 2025. This would require significant technological and financial interventions. At the same time, it’d also include MSMEs employing a much larger number of people. However, the slowdown in the economy before Covid struck and the shock of the pandemic has increased the challenges for the MSMEs. In this environment, taking the sector back on track will, by corollary, help strengthen the Indian economy as well.

LFPR, its decline and female-led MSMEs:

Another less-mentioned problem is the declining female Labour Force Participation Rate (LFPR) in India. LFPR is the percentage of people in the age group 15-59 who want to join the workforce. It went down from 30% in 1990 to 20.7% in 2019 according to the latest World Bank data. According to a study carried out by the United Nations Global Compact (UNGC) India, increasing female LFPR to the same level as male LFPR can boost the GDP by as much as 27%. Furthermore, only 20% of India’s MSMEs are led by women.

Why is LFPR falling?

There are multiple, diverse reasons behind the declining female LFPR in India. These range from factors like better financial stability for families to constraints like social biases against women working, a paucity of hygienic and safe working environments and a gender wage gap. The low percentage of female-led MSMEs are due to a lack of credit awareness, challenges in accessing finance, family pressures, paucity of child-care options, lack of confidence and technical awareness, among others.
Lack of credit awareness leads almost 90% of women-led MSMEs to approach the informal sector for credit. This condition is especially dire for women-owned very small enterprises (WVSEs). WVSEs in India have less than 20 employees with a turnover of 10-50 lakh rupees. Most WVSEs are concentrated in labour-intensive sectors.

How to make a course correction?

Part of the onus is on public policy makers and financiers to make inclusivity one of the central goals of recruitment and planning. Having separate and a variety of training programs for women can improve their employability. This needs to be supported by formulating strategies for diversification of jobs. Publicising female role models would be a great idea as well. On the financing side, lenders need to look beyond subtle biases in their programs and services and actively look to raise the percentage of women-led enterprises among their clients. Increased lending to WVSEs would help the dual goals of supporting female-led MSMEs as well as improving the female LFPR, because a number of such units have a majority of female employees.

We don’t have to look too far away to see the benefits of boosting female LFPR for a country’s economy. Bangladesh has benefitted immensely from the same. A modern textile manufacturing hub, Bangladesh’s LFPR improved from 26.7% in 2000 to 36.37% in 2019, according to World Bank data. Its GDP has more than tripled in the intervening years.

To make a serious charge at the $5 trillion mark for our GDP, we can’t afford to have four-fifths of women of working age not being in the workforce at all. We have the examples around us. We also have working models that can be replicated quickly and with relatively less investment. Widespread training and skilling courses for women, improved bureaucratic support for the sector with expedited clearances and grants, and strengthened financing from institutional lenders for women-led enterprises can go a long way towards strengthening the backbone, and thus, the whole body of the Indian economy.