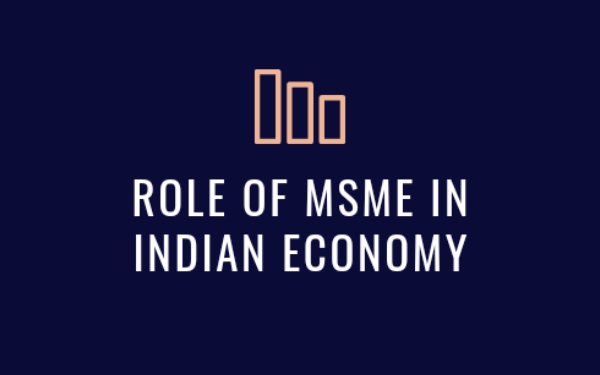 Role of MSME in Indian economy

Also referred to as the backbone of the country next to agriculture. They play a dominant role in contributing to the country’s GDP, manufacturing output, and the country’s exports.

The enterprises generate a lot of employment opportunities thereby helping bridge the gap between unemployment and poverty; also paving the way for the development of the rural areas in the country.

They have helped industrialization in these areas with low capital cost compared to large industries. In complementary to the large business sectors, MSMEs have a major part in the country’s economy, thereby helping in the socio-economic development of the nation.

They produce and manufacture both for domestic and international markets. So much advancement and product improvement has been seen in the khadi and coir industries. The upbringing of rural areas has been one of the major outcomes of the MSMEs collaboration with the various ministries and State Governments.
To be precise the 6.3 crore MSMEs are not only contributing one-third to the nation’s GDP but also help in the employment of the population in the non-formal sector.

The MSMEs play a major role in the transformation of India from an emergent power to a reputable financial center. Not wrong in saying that the MSMEs will be the gear in the wheel for this journey.

Importance of MSME for the economy

Throughout the world, the MSMEs have been accepted to be a major means of economic growth and for the promotion of justifiable development. The rate of growth in the highest rate is from the MSMEs.

Requiring Low investment for setting up, flexible operation, and the ability to develop the native technology accordingly are few major reasons that MSMEs have for having taken India to greater heights.
The second-largest employment generating sector next to agriculture, employing about approximately 120 million people.

MSME ministry targets to increase the GDP to 50% due to their contribution by the year 2025, as India moves ahead to become a $5 trillion economy.

At present, they contribute about one-third of the GDP which is 6.11% from manufacturing, and about 24.63 from the MSME service activities of the 45 lac units across the nation.

MSMEs contribute about 45% of the overall exports.
By specifically employing the people in weaker sections of the rural society, the MSMEs promote all-round development through the provision of employment opportunities.

Opportunities to utilize banking services and products are encouraged to be used by MSMEs in tier 2 and tier 3 cities thereby an additional way wherein the amount can be used in the inclusion of the final economy contribution.

MSMEs encourage innovation in budding entrepreneurs to build new products thereby boosting the growth and help in fueling the economy.

COVID-19 and its impact

MSME’s play a crucial role in realizing the vision of ‘Aatmanirbhar’ or self-reliant India. It was also one of the hardest-hit sectors due to the COVID -19 pandemic as the supply chains in world trade took a major jolt and came to a standstill. The government has been lending helping hands to regain the momentum in these sectors, knowing that prioritizing the development of these sectors is critical to the overall development of the Nation. As much as the Government provides support to these sectors, the benefits can be utilized only if the Business is registered as MSME under the MSME act.
An economic package was proposed to regain the momentum, about 20 lac crores almost 10% of the GDP was brought in to help all sectors including the farmers, middle-class people, industrial units, and MSMEs.

1. Around two lakh MSMEs would be benefited from the 20,000 crore subordinated debts announced for MSMEs.

2. A collateral loan of three lac was provided with a tenure of four years.

3. The definition of MSMEs was changed which now included turnover as one of the parameters in addition to investment. Micro units can have a 5 crore turnover, with no global tender for up to 200 crores and any pending payment to the MSMEs to be made in 45 days.

4. A 12month moratorium on the loans and a 100% credit guarantee cover to be provided as well. These loans were provided until October 31st this year. Close to 45 lac MSMEs were supposed to be benefitted from this.

5. Global tenders up to 200 crores were banned in any Government venture, as foreign companies are bright competitors and use unfair practices to procure the opportunities. The result of which Indian MSMEs falling prey to such international giants. Banning these will help enhance the vision of a self-reliant India and also enable ‘make in India’ to come true sooner.

As the Government now highlights the role of MSMEs in enhancing exports and thereby making our country self-reliant, the need to import from China will stop. These were the Union Minister, Nitin Gadkari’s thoughts that echoed in his meeting .
Being self-reliant already being implemented in industries such as automobile and agriculture, solutions have been seemingly found and the need to import from China has certainly not been seen as a necessity. The results of which were seen sooner as India was now observed to export a lot than importing.

He also said that as far as Indian policies are concerned, our way of technology acceptance, reducing the production cost and providing products of good quality, the young talented manpower in the country is no doubt the strength behind the achievement of self-reliant India.

With the majority of countries not interested to be dealing with China currently, rather providing an advantageous situation for us; as they are rather interested in doing business with India. A great opportunity for the manufacturing sectors to scale up capabilities to boost exports and thereby contributing to the increase in the economy.

With positive trends showing lesser imports from China and greater exports, the minister added that MSMEs are doing a great job despite facing an economic crisis. He also added that the Government had sanction 93 schemes and over 100 schemes are in pipeline would be cleared sooner to pave the way development of MSMEs.

3. Using the waste to make something useful (in short waste to wealth)

If we see notable developments in the above areas that could be an added advantage for us.