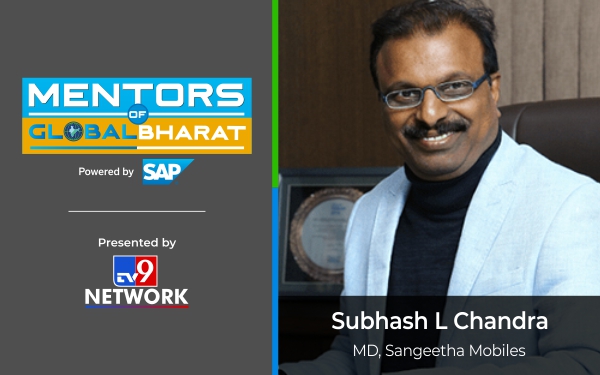 This Mentor built a multi-brand retail chain from a shop

Baptism by fire — this can well define the initiation of Subhash Chandra L into his family business. Taking up the reins of the family business at the tender age of 17, Chandra has been able to grow and steer the business through phases of upheavals with unwavering determination and an innate desire to excel.

Transforming a company calls for immense perseverance, sacrifice and risk-taking ability. Chandra possesses these three traits and the results are there to be seen.

From a shop selling gramophone records, the company is now a leading multi-brand retail chain dealing in leading international and domestic brands of mobile handsets and accessories. It also sells laptops and TV sets of select brands like OnePlus, Realme and Xiaomi.

In an interview with Money9, Chandra revealed the various trials and tribulations he has faced during his journey and has managed to succeed despite the various odds stacked against him.

“I had to enter the business at a very young age because I lost my mother when I was only 7. My father and I didn't have a house to live in. Sangeetha, JC Road, was our house, shop and office all rolled into one. From there only I used to go to school. We used to eat at hotels. So, I am used to facing challenges from a very young age," he reminisced during a conversation with Money9.

In any success story, hard work essays have an intrinsic part. In Chandra’s case, he is grateful to the Almighty for blessing him with the luck needed to flourish in the cut-throat world of business.

“In the 70s, there were very few business opportunities in Bangalore. I took charge of the business in 1982 and until 2014, I always saw success. I will call myself lucky as God has been kind. I got rewarded for my hard work. We have come a long way in our journey. In 1982, we were dealing in consumer electronics. Then came the era of computers, pager and mobile phones,” he recalled.

Many entrepreneurs stutter to take the organisation to the next level. The majority are conservative and only a few have the gumption to head into an aggressive expansion path. Chandra took the road less travelled, and it has paid off.

"I could have stopped with having just one store as the business was going good but I took a daredevil step by opening a second store in 2002. Then I expanded to different cities like Mysore, Mangalore, Hyderabad, Chennai, Ahmedabad, Varanasi, the whole of South India and soon now in Goa. It is like a habit now. We are opening 10 stores every week now,” he added.

But it has not been smooth sailing all the way. There have been setbacks too. But he was never deterred by them.

"Until 2014, everything was good. It was akin to a honeymoon. In 2013, we launched our own mobile brand Vam Mobile and invested in a pan-India structure with authorised service centres and distribution. However, we faced huge losses. The entry of e-tailers like Flipkart and Amazon also hit us hard. I can describe the period as bloodshed. For the first time, Sangeetha’s graph began dipping. However, we learnt from the hard times, became stronger and did not give up", he said.

Successful entrepreneurs always turn a crisis into an opportunity is often used in business circles. Chandra revealed how the GST rollout, which resulted in disruptions for many business houses, helped him.
"People criticised GST and demonetisation. But if you ask me, for Sangeetha, we became stronger as GST reduced the paperwork, making it easier for us to open a branch wherever we want,” he said.

"For the past few years, my only goal and ambition have been to make Sangeetha a listed company and become India’s biggest mobile retail chain," he said.

He also believes that government initiatives like the PLI scheme and Aatmanirbhar Bharat will open up further growth opportunities for his company.