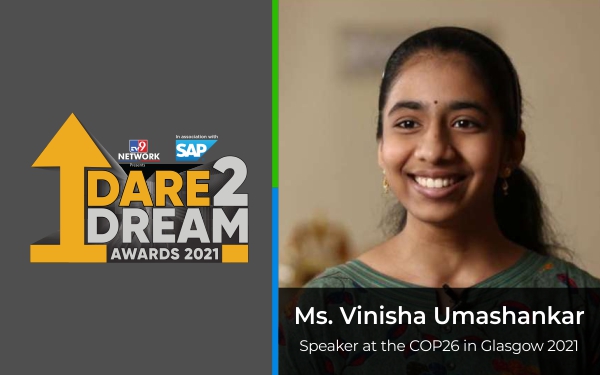 Vinisha Umashankar, environmentalist & speaker at the COP26 in Glasgow, talks about her remarkable experiences at the awards ceremony.

The Kerala & Tamil Nadu edition of the Dare2Dream Awards hosted Ms. Vinisha Umashankar as the Guiding Light speaker, a young pioneer who has set a new precedent for what it means to be proactive.

Not very long ago, Vinisha Umashankar was like any other 10th Grade student in India. She often joined her mother in carrying a bag full of washed and dried laundry, which they would take to the nearest ironing stall. The ironing stall was managed by a couple who managed a mobile ironing cart using charcoal filled cast iron containers. Vinisha observed how these iron stall vendors worked very hard, perspiring in the punishing heat, while the hot charcoal emitted smoky plumes into the atmosphere. Vinisha realized that there were at least six vendors within Tiruvannamalai, the temple town where she lived and that there could possibly be numerous other vendors all over the country. She thought about the scale of environmental damage caused by tonnes of charcoal being burnt every single day and the related issues of deforestation, respiratory problems, and climate change. It is a well-known fact that burning charcoal releases particulate matter and carbon dioxide which pollutes the air and accelerates climate change. Vinisha was determined to find a solution that would make the lives of these vendors easier and minimize the damage caused to the environment.

A few years later, Vinisha found the answer to her conundrum in solar energy. She worked really hard for a period of twelve months trying to come up with a cart designed to work on solar energy. She spent hours diligently studying college-level physics to understand how solar panels could be helpful. She came up with a design concept for a cart that used solar panels to power steam irons and submitted her design to the National Innovation Foundation. Engineers at the NIF helped her build a workable prototype and apply for a patent. The finished product was called Iron-Max. In November 2021, she won the Children’s Climate Prize and she was also one of the finalists for the Earthshot Prize. Recently she also gave a moving speech at the COP26 Climate Change summit held in Glasgow.

Vinisha spent some time at the awards ceremony talking about her experiences. She spoke of how she had always been interested in science and wanted to put that knowledge to good use. She strived to do that through her innovation – the solar ironing cart. She mentioned that getting to speak at COP26 was a great opportunity to represent youth all around the world who would have good ideas but tend to get overlooked because of their age. She said that balancing sustainability with our diverse geographical and demographic profile along with growing urbanization was quite challenging. However, India has made great strides in the past seventy years and is in a good position to achieve sustainability goals if we set our minds to it. Vinisha also congratulated all the entrepreneurs who won awards and were ultimately working towards making the world a better place.