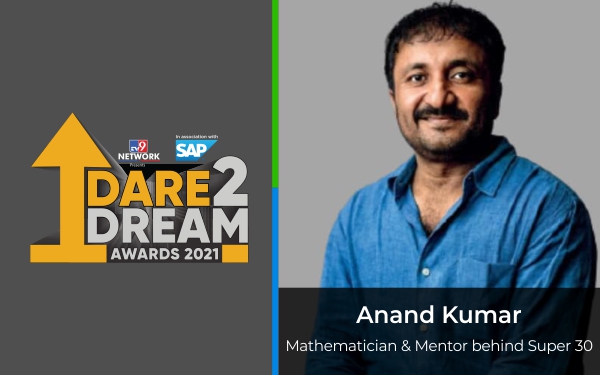 Dola Banerjee, Archer and winner of the Arjuna Award, inspires the audience as the Guiding Light at the awards ceremony.

Anand Kumar was born and raised in Bihar. His father worked as a clerk and Anand attended a Hindi-medium school where he developed an abiding love for mathematics. His family’s financial circumstances meant that he would be unable to take advantage of any supplementary assistance from coaches or tutors. His intellect would nonetheless shine through. While still an undergraduate student, he submitted several research papers on number theory, which were published in the Mathematical Spectrum. Anand secured admission to the University of Cambridge but was unable to attend due to financial constraints and his father’s untimely death.

A well-wisher advised Anand to teach mathematics. In 1992, he opened the Ramanujan School of Mathematics (RSM). The school started with two students, then went on to thirty-six; within three years the school had approximately five hundred students enrolled in the classes. Although the school fee was nominal, it wasn’t something poorer students could afford. Once a student approached Anand with a request: the student wanted to enroll at RSM but was poor and couldn’t afford the fee. Anand didn’t want to refuse the boy and deny him the opportunity to pursue his dreams just because he was unable to pay the fees. This was the genesis of Super 30, an educational program that selects 30 talented students from economically weak backgrounds and tutors them for the IIT JEE—the entrance examination for the top-ranked Indian Institutes of Technology. Students who joined the program were offered free boarding and lodging. In fact, Anand’s mother herself prepared the food for these students. The Super 30 has an excellent track record. From 2003 to 2017, 391 out of a total of 450 students have cleared the IIT JEE exams. Anand has never taken any financial support from government or private institutions. He was inundated with offers to finance Super 30 but has refused all such offers. He manages Super 30 from the proceeds he earns from RSM.

For his pioneering and selfless work in education, Anand Kumar has been the recipient of several awards: The Global Education Award in 2018, the Education Excellence Award in 2019, and the Mahaveer Award. Anand Kumar shared his wisdom and insights with the audience. He spoke of how his inability to enroll at Cambridge University because of financial constraints motivated him to help other such students succeed. Specifically, he intended to help children from economically weak backgrounds gain admission to the prestigious IITs. He noted that in order to achieve one’s dreams it was important to persevere irrespective of the challenges one faces. He also spoke of how it was important to set goals that appear larger than life to keep one grounded and humble.