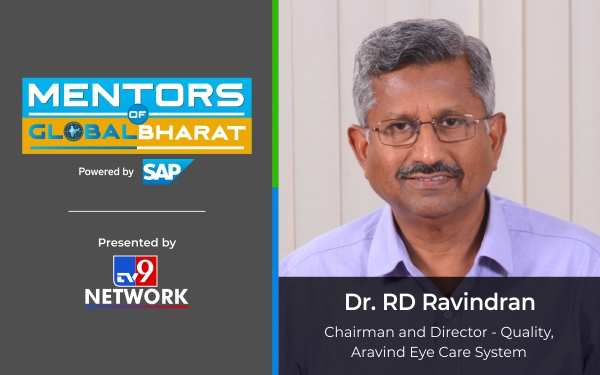 Dr RD Ravindran: Man on a Mission to Eliminate Blindness

Leading the Fight Against Blindness Through World-Class Eye Care

Dr RD Ravindran began his career in 1987 under Dr G Venkataswamy, the founder of Aravind Eye Care System (AECS). When Aravind first built a new centre, he was designated as the Chief Medical Officer.

Dr Ravindran took over as the Chairman of AECS in 2010 and today under his leadership the institution has grown into one of the best in eye care in the world.

"The quality of Aravind is comparable to any other organisation in the world. If you take the infection rate in Aravind, especially in cataract surgeries, it’s 2 per 10,000, where the benchmark across other developed countries like America and Western Europe may be around 4 to 5 per 10,000. In a way, we have very low infection rates and our complication rates are also less than 1.5 per cent which is lower than many other comparable systems," said Dr Ravindran explaining the hospital's accomplishments.

The Aravind Hospital system was founded in Tamil Nadu’s Madurai by Dr Govindappa Venkataswamy, who had the goal of delivering superior cataract treatment for all. Since its inception in 1976, Aravind Eye Care System (AECS) has served more than 32 million patients through its network of clinics and hospitals throughout India. It has grown into a global leader in eye care, ophthalmic education and the development of suitable technology for cost-effective surgery. AECS can perform cataract surgery at a lower cost than in the United States.

Founded in Maduraias a modest 11-bed hospital, today it is the largest hospital providing eye surgeries in the world. It provides services that range from primary to advanced tertiary care. Over 4.5 lakh eye surgeries are performed annually at Aravind.

From 2004 to 2012, he was a regional co-chair of the International Association for the Prevention of Blindness, and since 2008, he has been a board member of VISION 2020: The Right to Sight – India.

Dr Ravindran gives the credit for immense success to his team and the people involved. "Whatever we were able to achieve today is not just because of the work of Aravind alone but because of people who are involved in this journey, who also share our passion in eliminating illness and blindness from the world," he said.

"We work with some of the top universities in the United States, like the University of Michigan, Johns Hopkins University, Harvard University, the universities in San Francisco and New York. We also have a lot of ongoing studies with the London School of Public Health and also some of the institutions in Europe. It is a collaborative work," said Dr Ravindran elaborating on the research projects of AECS.

Dr Ravindran says that for any entrepreneur to succeed, the leadership perspective is very important. "As a leader you have to have clarity on the purpose of your organisation. It is not only having the clarity of purpose but also really owning that problem and having the right perspective about that problem. In any organisation, one individual or a group of individuals cannot achieve it. It has to be the whole team which has to work together."

"Again as a leader you have to be focused on how you constantly develop the people. The development is very important. Not just paying salary and giving the right compensation, which is also important, but how do we create a pathway or career progression for the people so they also feel that they are contributing meaningfully over a period of time," he added.