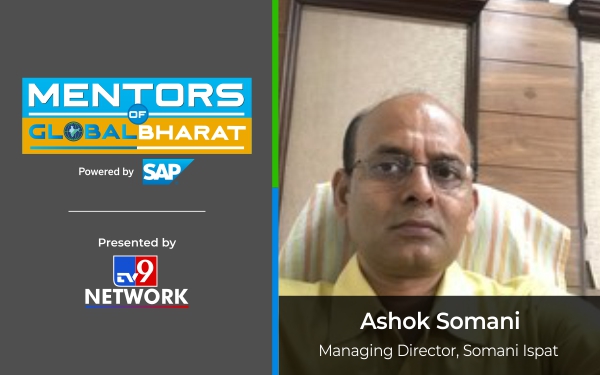 An entrepreneurial vision that moulded the steel industry

From earning Rs 300 a month to being one of the most successful steel tycoons of India, the journey of Ashok Somani has been phenomenal.

Ashok Somani is the Managing Director of Somani Ispat, the largest stockist of iron and steel in Andhra Pradesh and Telangana, as well as one of the largest in South India. The company's turnover is over Rs 800 crore and its remarkable client list includes ITC, TATA, Ultratech, Reliance and HCC.

There are several expansion and diversification projects in the pipeline for SIPL, and the company intends to evolve from a trader to a group of companies with diverse operations.

"It was by chance that I got the opportunity to work in the steel industry and learn about its intricacies. Then I realised that steel is the best material to deal with because it is the strongest. It is also easily recyclable and the most environment-friendly material. So, it was necessary to get some practical knowledge before going all-in," says Somani.

Somani says his target from the beginning was very small. "I began working in Hyderabad for Rs 300 per month, and last year our revenue exceeded Rs 1000 crore. This year, we are expecting an overall turnover of over Rs 2000 crore,” adds Somani.

He started learning about the steel industry from his first mentor in Kolkata. He then moved to Hyderabad and within one month he stepped into the steel business with one of his friends.

He continued for a year but couldn’t make it big. He started another venture and worked in partnership for 15 years. He became the director of Somani Steels in June 1992.

"It turned out brilliantly and we became the biggest name in the industry in Hyderabad. We have already completed a project of almost 1 million square feet. It’s a first-of-its-kind residential-commercial project in Hyderabad," says Somani.

"Being just a part of the supply chain was not a great idea, so we thought of working past it. Initially, the manufacturer would provide material to the distributor, who would sell it to the retailer and so on. There were three middle men in between the manufacturer and the consumer, so we cut the supply chain and became a one-stop solution for all of it," narrates Somani about his company's journey.

Ashok Somani has had an extraordinary journey as an entrepreneur, but it's been one incredible roller coaster ride. His success inspires many young entrepreneurs to never give up and to accept failures as motivation for the future.