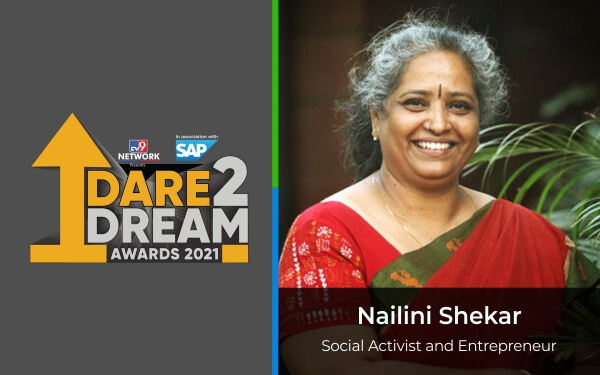 Nalini Shekar, an entrepreneur who is transforming the lives of waste pickers, shares her memorable journey at the awards ceremony.

The Dare2Dream Awards ceremony held in Bengaluru on 7th December 2021 featured Nalini Shekar, an entrepreneur and tireless social activist as the Guiding Light speaker, who shared her experiences with the audience.

Nalini Shekhar was born and raised in Bengaluru. She spent a large part of her life in Maharashtra and the United States. In the US, her work included helping women and children who had been victims of violence. She also worked to support legislation protecting victims of human trafficking in California. In the States, Nalini also ran a shelter for immigrant women victimized by domestic violence. In 1997, she co-founded a union of waste pickers, called Kagad Kach Kashtakari Panchayat in Pune. In 2010, Nalini returned to India with the intention of going back to the US after a break, however on witnessing the growing issues related to waste management in Bengaluru, and the plight of those responsible for picking the waste, she stayed back and co-founded Hasiru Dala (Green Force). Hasiru Dala aims to help marginalized workers engaged in waste picking and enable sustainable waste management in the city. Since its inception, the NPO has created 540 jobs and facilitated the organization and deployment of 9500 waste pickers in numerous residential areas and official premises. Hasiru Dala helps waste pickers procure occupational identity cards, and helps them obtain loans and healthcare. These identity cards have allowed female waste pickers to open bank accounts, 400 youth to procure education loans, and 1800 families to take advantage of central government health insurance schemes.

In 2015, the NPO branched out into another for-profit venture known as Hasiru Dala Innovations, which is focused on waste management. The company has aided the creation of approximately 20 additional small franchisees who in turn employ about 150 waste pickers as full-time employees. This unique franchise model has taken the informal model of waste picking and made the entire waste management operating model more streamlined. The company has also expanded its operations to profitable domains such as waste management for corporate events and marathons.

Nalini Shekhar has not only impacted the lives of waste pickers in a positive way but has also created an entirely new business model for waste management in the country. At the Dare2Dream awards ceremony, she spoke of some memorable moments in her journey. She spoke about how she saw waste pickers as entrepreneurs and that she was very proud of how far they had progressed, with many of them even filing tax returns and employing more people in turn. She also spoke of some of the challenges she had faced initially. She talked of how some people had a negative perception of the work she was doing, and how it was very difficult to build a trust-based relationship with the waste pickers she was working with. However, she persisted and finally succeeded in building good camaraderie with them. She also mentioned that her innate sense of justice and equitability motivated her to work with the waste pickers to help them thrive financially and gain the wherewithal to succeed in life.