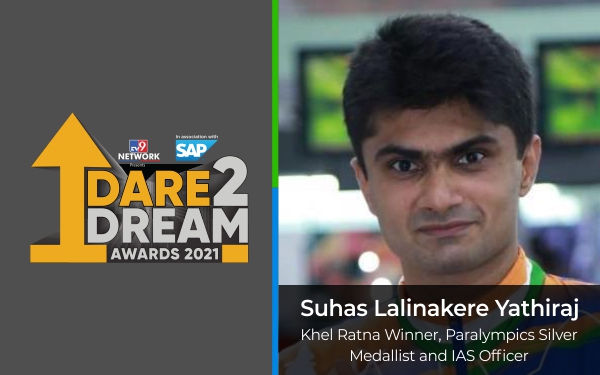 The Dare2Dream Awards ceremony held in New Delhi on 30th November 2021 featured Suhas Lalinakere Yathiraj as the Guiding Light guest speaker who shared his wisdom and insights with the audience.

Suhas Lalinakere Yathiraj is a living example of what it means to overcome insurmountable odds to achieve one’s goals. Suhas completed his schooling and university studies in Karnataka, scoring a First Class with Distinction in Computer Science and Engineering from the National Institute of Technology, Karnataka. After that he distinguished himself by passing the country’s toughest Civil Services Examination and went on to become an IAS officer. More importantly, Suhas achieved all this being specially-abled. He’s India’s first specially-abled IAS officer. He was born with a congenital deformity that afflicted one of his legs. However, he never let his disability prevent him from fulfilling his dreams and excelled in academics and sports alike. Many of us have dreams and aspirations, however very few among us have the resilience or the discipline to bring these to fruition.

Never one to shy from challenges, Suhas represented India internationally in sports, winning the gold medal for India in the 2016 Asian Para-Badminton Championship. In 2016, he also received the Yash Bharti Award, one of Uttar Pradesh’s highest civilian honors. History beckoned him once again, and in the 2020 Tokyo Paralympics, Suhas won a silver medal against top seed Lucas Mazur of France. Suhas is currently ranked number two in the men’s singles SL4 category in badminton globally.

At the height of the COVID pandemic, people across India were suffering. Hospitals were running low on resources and communities were in a crisis. Suhas was appointed the District Magistrate of Gautam Buddh Nagar at a time when many were questioning the country’s preparedness for the pandemic. Suhas was praised for his management of what many consider a highly precarious situation. One of the many measures he took was demanding firm action against unethical practices such as overpricing of medical services.

At the Dare2Dream Awards ceremony, Suhas spoke of how he hoped to inspire the youth and entrepreneurs alike to Dare to Dream and follow up their dreams with discipline, hard work, and determination. He said that it was important to try and fail rather than not try at all, because life would always be full of ups and downs and that one must be focused on the goal and overcome one’s fear of losing. He emphasized the importance of evaluating one’s strengths and weaknesses. He stressed working on weaknesses and excelling when the opportunity to perform presented itself. He also spoke of the importance of teamwork. In this respect, he said that a good leader can inspire and motivate his team members to achieve their maximum potential and also bring about an alignment of individual goals and organizational goals.

Suhas exemplifies the spirit of the Guiding Light. His outstanding achievements in diverse fields and his commitment to excellence are important lessons for everyone to ‘Dare to Dream’ and persevere irrespective of the challenges they may face.