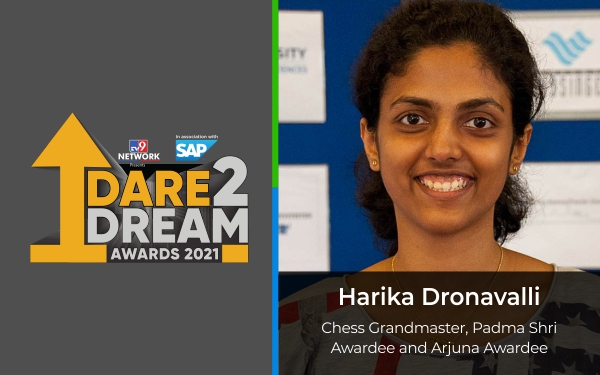 Harika Dronavalli, Padma Shri and Arjuna Awardee, takes the stage as the Guiding Light at the awards ceremony

Harika Dronavalli is a chess grandmaster, and the only woman after Humpy Koneru to become a grandmaster. She continually won three bronze medals in the Women’s World Chess Championship in 2012, 2015, and 2017. In the year 2007, recognizing her achievements, she was awarded the prestigious Arjuna Award. In 2016 according to the FIDE (International Chess Federation) women’s ranking, she was ranked fifth in the world; soon after she won the FIDE Grand Prix event in Chengdu, China, winning a gold medal. In 2017, she won another bronze medal at the Women’s World Chess Championship, despite facing many ups and downs during the tournament. The 2017 game was especially noteworthy as she came close to defeating the eventual winner, Chinese grandmaster, Tan Zhongyi. In 2019, she was awarded the Padma Shri recognizing her contributions in the field of sports. Harika won the silver medal in the 2021 FIDE Women’s World Team Championship and a bronze medal in the FIDE Online Chess Olympiad 2021.

Harika Dronavalli was born and raised in Guntur, Andhra Pradesh. She was interested in chess from a very young age and learned the game from her father. She won her first medal in the under-9 category national championship and followed this up with a silver medal in the youth under-10 girls’ category the following year. In 2001, she won another silver medal in the under-12 category. Apart from these, she has won numerous other awards. One of her many memorable wins was the gold medal she won in the Asian Girls under-18 games in 2002 as an 11-year-old. Throughout her young career, she has won an unprecedented 16 medals at national tournaments. Since then, she has been training with NVS Ramaraju, who has been her mentor. Harika has constantly strived to raise the bar for herself and aims to be World Number 1 someday.

As the Guiding Light speaker, Harika shared some of her memorable experiences with the audience. She spoke of the importance of learning from failures and advised that rather than dwelling on them, to focus on doing one’s best irrespective of the circumstances. She emphasized the importance of believing in oneself and taking every opportunity to learn while keeping a firm focus on one’s future goals. She narrated her experience of preparing for a high-stakes tournament, and reiterated the importance of staying focused on one’s performance when it counts, rather than getting distracted by the results of any particular tournament. Finally drawing on her own life experiences, Harika shared three key principles for success: discipline, passion and hard work, and setting ambitious goals rather than taking a risk-free approach.

Harika Dronavalli has made India proud and this was a great opportunity for the audience to hear her experiences and get inspired. May she achieve her dream of being World Number 1 soon.