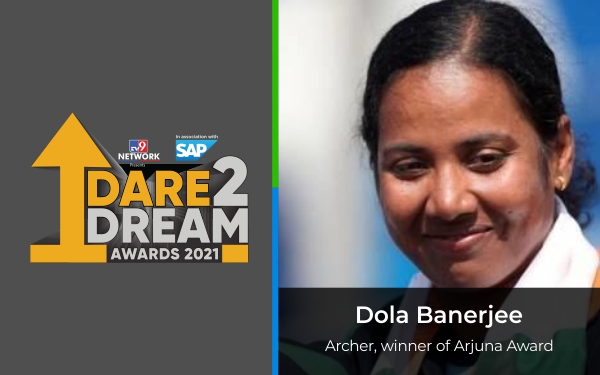 Dola Banerjee, winner of the Arjuna Award, inspires the audience as the Guiding Light at the awards ceremony.

Dola Banerjee was born and raised in the city of Baranagar, close to Kolkata. While many athletes have a moment of sudden inspiration that creates a connection with the respective sport they love, Dola developed a passion for archery over a period of time. She remembers her first encounter with the sport in less than flattering terms, recounting how she thought that the sport was rather boring. That perception changed when she won a bronze medal representing Bengal at the age of nine. Her first full-fledged training in archery began at the Baranagar Archery club at the age of nine. In 1996, at the age of sixteen she represented India at the Youth World Championship in the US and in 2004 represented the country in the Summer Olympics. In the course of her 20-year career in archery, Dola Banerjee has represented India in two Olympic Games, three Asian Games, four World Championships, eleven World Cups, ten Asian Grand Prix, three European Grand Prix, two SAF Games, and several other international sporting competitions. Dola has won eight bronze medals, three silver medals, and more than sixteen gold medals for the country at the international level. At the national level she has been awarded more than fifty-two gold medals, twenty-one silver medals, and eight bronze medals. She is only the second woman archer in the country to be awarded the Arjuna Award by the Government of India for her unparalleled contribution to the sport.

Apart from her individual achievements in archery, Dola has done a great deal for the sport in other capacities. She played a crucial role in the development of archery as a sport in the state of West Bengal through her membership in the Sports Development body. Familiar with the toll taken by the lack of resources, especially for young players, Dola and her brother Rahul, (who is also an archer competing internationally) started the Dola and Rahul Banerjee Sports Foundation in 2015. The Foundation was aimed at identifying young talent and training them to be India’s next big star in the sport.

Dola Banerjee shared her wisdom and insights with the audience. She talked about her initial struggles while preparing for competitions and how her family’s unflinching support and disciplined training helped her tackle many challenges. Dola emphasized the financial and infrastructural difficulties faced by players, most of whom belonged to middle-class families, which prevented them from displaying their skills. She urged attendees to contribute towards the financial development of residential academies which groom and prepare players from a very young age to compete internationally. Dola concluded by saying that Indian players who compete at an international level have come a long way, however, there was a need to gear up mentally to get ahead of international players.