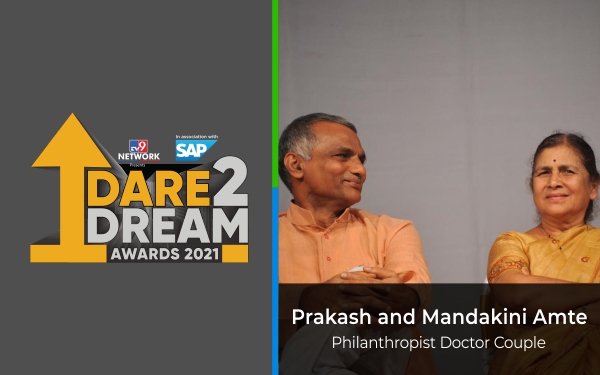 A Beacon of Hope Illuminates the Dare2Dream Awards 2021 Mumbai Edition

Dr. Prakash Amte and his wife, Dr. Mandakini Amte have devoted their lives to the service of others. In the early 1970s, they moved to Hemalkasa to work with the Lok Biradri Prakalp (LBP) social project in the Gadchiroli district of Maharashtra. This LBP was a project started on December 23, 1973, by the legendary social worker Baba Amte, who also happens to be Dr. Prakash Amte’s father. The aim of the project was to support the integrated development of the Madia Gonds or the endogamous Gond tribes living in Chandrapur District and Gadchiroli districts. The Madia-Gond tribes were isolated from the outside world and LBP has been working towards enabling them to adapt positively to the external world by facilitating easier access to medical care, community health programs, schools, extension activities and the village development program. The objective at LBP is to make the Madia Gond responsible and self-sufficient citizens, aware of their rights and capable of defending themselves.

Although today LBP houses schools, hospitals, and an animal welfare center called Amte’s Animal Ark, and other social development programs, the initial years of the project were characterized by intense struggles in an extremely challenging environment. The area was covered in dense and thick forests with no roads or infrastructure to speak of. In addition, they had to contend with engendered cultural norms among the Gond tribesmen who didn’t find any value in education and sought the witch doctors’ advice for medical ailments. Gradually the tribals developed a high regard for Dr. Prakash Amte and Dr. Mandakini Amte’s sincere and tireless work, that they chose to walk long distances of up to 100 kms carrying their sick, rather than visiting nearby health centers run by the State Government. For their selflessness and service, Dr. Prakash and Dr. Mandakini Amte won the Ramon Magsaysay Award.

Dr. Prakash and Dr. Mandakini Amte graced the Dare2Dream Awards ceremony held in Mumbai with their presence on December 1, 2021. While relating his experiences, Dr Prakash Amte spoke of being inspired by his father Baba Amte, who often stated that ‘Work is Worship’, and that this tenet had guided many of his endeavors. He spoke of their initial experiences with the tribes who had no possessions, clothes, or food. As doctors, he and his wife decided to help them with their medical expertise, but soon realized that true progress would require intervention on multiple fronts including education, vocational training, and agriculture. The tribals often killed orphaned animals for food. Dr. Amte discouraged this practice, offering the tribesmen grains instead, for bringing orphaned wild animals to Amte’s Animal Ark. Dr. Prakash and Dr. Mandakini Amte stressed the importance of selfless service and emphasized that the satisfaction and happiness gained from serving others was much more enduring than that derived from material possessions.

Dr. Prakash and Dr. Mandakini Amte will continue to shine a light in the lives of the disadvantaged and are a beacon of hope and inspiration for the younger generation.